Raising Awareness: The Silent Witness Project at the Toledo Library

Domestic violence is an International epidemic

Defined as the willful intimidation, physical assault, battery, sexual assault and/or other abusive behavior perpetrated by an intimate partner against another;  there is no corner of the world where domestic violence does not reach. Domestic violence affects individuals in every community regardless of age, economic status, sexual orientation, gender, race, religion or nationality.The devastating physical, emotional and psychological consequences of domestic violence can cross generations and last a lifetime. For women, the threat of death due to domestic violence is very real – especially when they begin to take steps to leave.

In 1990, the Silent Witness Initiative began with a goal to promote education through community-based exhibits in an effort to end domestic violence. It started with a small group of volunteers in one state and grew into an international movement, with projects in all 50 states and 23 countries.

The Northwest Ohio Silent Witness Project, which is housed and maintained at the Bethany House of Toledo, currently consists of over 55 Silent Witnesses whose lives were abruptly and violently ended at the hands of a husband, ex-husband, partner or stalker.

For the month of October, TLCPL’s Reynolds Corners Branch Library will be exhibiting 10 Witnesses in an effort to remember the stories and names of these women.

TLCPL is also partnering with the Bethany House to offer several information sessions about domestic violence. These sessions will focus on 1 of 2 topics and will be held at several branches throughout the library system.

Summer is just around the corner! You know what th

This Sunday, May 25th, we're peeling back the curt

We're on Cloud 9 ☁️ knowing that BCAN took home an @GreatLakesEmmys Award 🏆 over the weekend for UNTOLD: Willow Beach! 👏

BCAN has won a @GreatLakesEmmys for UNTOLD: Willow Beach! 🏆

𝐂𝐨𝐧𝐠𝐫𝐚𝐭𝐮𝐥𝐚𝐭𝐢𝐨𝐧𝐬 to everyone involved in putting together such an incredible piece and you are so deserving of the recognition! 👏

Congrats to John W. of Maumee! He has won the Grand Prize in our Father’s Day Contest.

Coming June 25th, it's THE BASH at the @ISTscience!

We've got host of Four One Nosh, @table4tim, checking out one of the vendors that will be on site, Napa Kitchen & Bar! 🍷

We're giving you a chance to win a Father's Day Prize Pack! 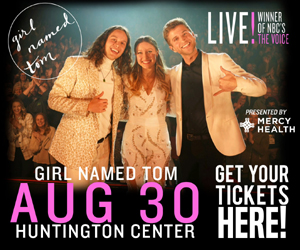