From the Brink of Extinction

As part of an international conservation initiative, Toledo Zoo recently sent 600 captive-reared Kihansi spray toads to Tanzania to be released into their native habitat.

The Kihansi spray toad (KST) is a tiny, goldenrod colored amphibian that is native only to the spray zone (where the falling water meets the rocks) of the waterfall in the Kihansi Gorge in Tanzania. With a complex past worthy of its own documentary, Kihansi spray toads went extinct in the wild between 2003 and 2004, as the developing country looked for ways to spread electricity to its people.

Since the beginning of our conservation efforts, the Toledo Zoo has helped to release 4,555 back into the wild, in hopes of recreating a self-sustaining population. 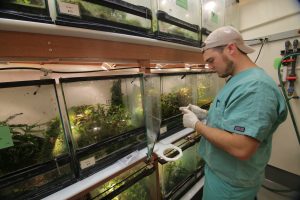 Flowers and the old Tree

It's the most wonderful time of the year to visit

On a PICTURE PERFECT day odds are you’ll find ph

Gotta get that SHOT! 📸 See what she’s seein

Could you use and extra $500 for the Holidays? Pl

In this season of giving and thanks we’re showin