Dan Robbins, inventor of the Paint By Number brand that indelibly shaped American popular culture, will be sharing reminiscences of the early days at the Craft Master company and how the numbered painting craze swept the nation. 20 North Gallery will be welcoming friends, fans and collectors to the free public reception on Saturday, March 24, from 4 – 7 p.m. The panel discussion will be from 4:30 – 5:15. The event will feature a complimentary hors d’ oeuvres buffet and cash bar by Venue. Due to space limitations, attendees are asked to respond prior to the event via telephone: 419-241-2400 or email: info@20northgallery.com

Dan Robbins is the author of ‘Whatever Happened To Paint By Numbers?: a humorous personal account of what it took to make anyone an “artist.”’ He will be signing copies of his book, which will be for sale at the event.

Robbins’ visit coincides with the final week of the exhibition of “The Grant & Goodridge Paint By Number Collections,” featuring historical canvases and memorabilia designed and painted by Robbins and Peggy & Adam Grant during their time at Craft Master, as well as selected works from the Paint By Number collection of the late Ann Goodridge, a dear friend of Peggy Grant, in tribute to her indelible rôle in this American popular culture phenomenon as one of the original designers. Some pieces have been featured in museum exhibitions of Paint By Number history, most notably the Smithsonian’s National Museum of American History 2001 exhibition, “Paint By Number: Accounting for Taste in the 1950s.” With the exception of a few archival items, all of the collected work is available for purchase.

Central to the exhibition is the artist proof of the Paint By Number canvas, “The Last Supper” (after da Vinci), which was designed and painted by Mrs. Grant’s late husband, Adam Grant. Created in 1964, during the Grants’ time at the Craft Master company, “The Last Supper “canvas became the highest selling kit in the genre of numbered painting.

In December 2017, this artist proof from Mrs. Grant’s collection was accepted into the permanent collection of the Smithsonian’s National Museum of American History (NMAH). “The Last Supper” will remain on view at 20 North Gallery as part of a Paint By Number historical display until its journey to the Smithsonian for induction into the NMAH collection.20 North Gallery owner Eric Hillenbrand states, ‘Ever since Peggy Grant served as a consultant to the 2001 Smithsonian Paint By Number exhibit, she hoped that the artist proof of “The Last Supper” would find a permanent home in their collection.  But on a larger scale, the fulfillment of this plan is recognition of the indelible impact that Peggy and Adam Grant have had on popular culture in our nation. The Craft Master Paint By Number brand has long been a “Toledo Treasure” in our local history—but now there can be no question that the Grants and their colleagues were truly creating national treasures. It is fitting that their work is soon to be enshrined in the Popular History collection of the National Museum of American History.’

The online catalogue of “The Grant & Goodridge Paint By Number Collections,” containing images of all available material, is posted to the 20 North Gallery website: www.20northgallery.com

Paint By Number & Dan Robbins                                The cultural phenomenon of Paint By Number began in 1950 at the Palmer Paint Company in Detroit (Michigan). Commercial artist Dan Robbins based his concept on Leonardo da Vinci’s practice of numbering sections of his canvases for apprentices to complete. After trial and error, Robbins’ painting kits became arguably the most loved—and most vilified—hobby of the “new leisure class” of 1950s Americans.

As the business rapidly grew, Robbins hired additional designers, including Adam Grant and Margaret “Peggy” Brennan, whose artistic partnership soon evolved to marriage. Robbins became their good friend, as well as the head of art direction for Palmer Paints and, later, the Craft Master company of Toledo (Ohio).

After many years designing and marketing paintings that promoted “the art of leisure,” Robbins went on to head his own Chicago-area advertising agency and became the definitive expert of the Paint By Number genre. Known as “the most exhibited artist in the world,” for the thousands and thousands of canvases of his design that proudly hang in the homes of the people who bought and painted the kits, Dan Robbins spent many years lecturing, researching and archiving Paint By Number history. He was a consultant to the 2001 Smithsonian exhibition, “Paint By Number: Accounting for Taste in the 1950s” and is the author of ‘What Ever Happened to Paint-By-Numbers? A humorous personal account of what it took to make anyone an “artist”.’ Now retired, he and his wife, a former Craft Master proofer, reside in Toledo, Ohio.

Not only popular, the kits were also highly controversial, accused of debasing the concept of original art. But the combined testament of generations of fans has demonstrated that, by making the process of painting more accessible to everyday folk, “Art,” itself, became more approachable and no longer the sole province of the cultural elite. Many fans attest that, through the introduction of Paint By Number, they had the courage to later attempt their own original paintings—a proud accomplishment for Mr. Robbins and all those who grew the brand.

The display of these Paint By Number collections is part of the “The Grant Collection,” exhibit featuring a variety of fine art media—painting, photography, ceramic, glass, drawings, sculpture, jewelry and mixed media acquired by the prominent Toledo-area arts advocate, Margaret “Peggy” Grant. The exhibit continues through March 31, 2018. Regular gallery hours are Wednesdays through Saturdays from noon to 4 p.m. or by appointment.

The online catalogue of “The Grant & Goodridge Paint By Number Collections,” containing images of all available material, is posted to the 20 North Gallery website: www.20northgallery.com

Due to space limitations, attendees are asked to respond prior to the event via telephone: 419-241-2400 or email: info@20northgallery.com

The online exhibition catalogue for “The Grant Collection” containing images of the full fine art collection and artist information is available on the 20 North Gallery website: www.20northgallery.com

Lace up your running shoes for the Medical Mutual Dart Frog Dash at the Toledo Zoo! 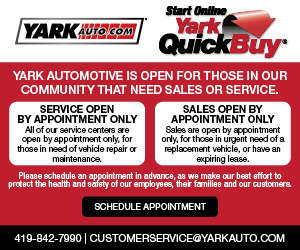